The small town of Gilboa, New York in southern Schoharie County, is home to the Gilboa Fossils. 380 million years ago, during the Devonian Period in the Geologic Time Scale, Gilboa was located on the shore of the gigantic Devonian Sea. (See Devonian Globe image below)

This was a tropical world, situated approximately twenty degrees south of the equator. Tree-like plants grew near the shore. Wind and rain were all that was heard, since this early world was devoid of birds and land animals. Long periods of drought were followed by monsoon rains and flooding. Occasionally, severe storms buried much of the shore forest in sand, killing plants. In time, the trees rotted. The molds of the stumps left in the sand were eventually filled with more sand, leaving us with the tree-stump fossils on display at the Gilboa Museum on Route 990v and Stryker Road in New York State.

Gilboa tree stump fossils are on display at the museum and
next to the Gilboa Town Hall on 990v.

Amazingly, no one knew the fossils existed until 1850, when an amateur naturalist found a sandstone cast of a portion of a Devonian-age tree trunk in the Schoharie Creek near Gilboa after a huge flood. The samples were sent to Canada where the specimens were described and illustrated by McGill University paleontologist John W. Dawson. This was the first documented discovery of fossil tree stumps in North America. 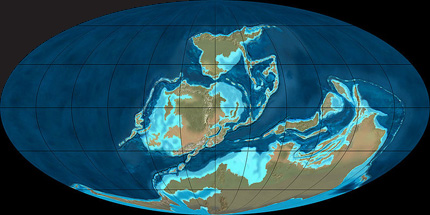 The importance of the Devonian Period lies in the great changes which then occurred all over the world. The period was an intermediate stage, a transition, from a wholly marine world to a terrestrial world. As plants began to evolve, so too did the landscape. The earth was forever altered when the first vegetation appeared on shore areas of the costal plains. Oxygen levels increased as the result of plant respiration, topography became more varied and the climate changed. Niches of all kinds became available and began to be filled with a bewildering array of new life forms.

In 1920, after the City of New York claimed the village of Gilboa to build the Gilboa Dam and the Schoharie Reservoir, the New York State Museum ordered a full-scale search for these fossils. About 50 were found: some were shipped to the State Museum; Hugh Nawn, the contractor building the dam, shipped others around the world; and 9 were left in Gilboa.

These are the oldest tree fossils in the world.
Scientists are still studying these incredible fossils to understand
their significance to the world today.
EXPLORE THE FOSSILS ON THIS WEB SITE NOW!