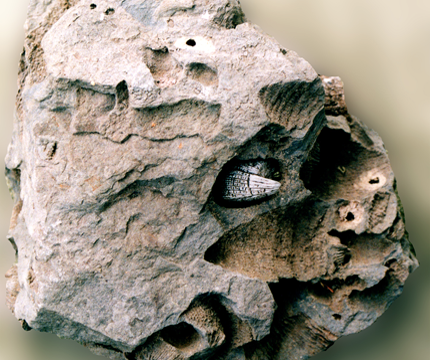 Ancient Coral
This ancient coral group example clearly shows the marine invertebrates that were already prevalent in the Devonian Period on Earth. Most of this coral was able to grow through photosynthesis. 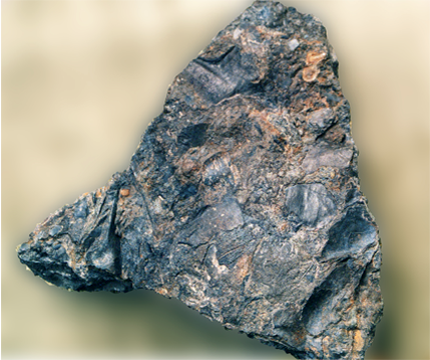 Devonian Fish Scales
Showing the fin and some armor the Devonian waters were not friendly. The Devonian period marked the beginning of life forms moving onto dry land. 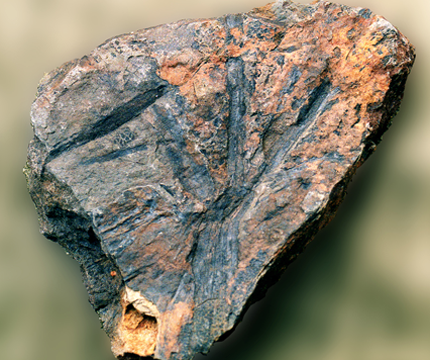 Bottle Brush Tree Crown
Devonian era forests were filled with slender trees that were 3 stories high and capped with branches that resemble bottlebrushes as seen in this fossil. Fossils such as this one found in Gilboa, NY represent 385 million year-old specimens of Earth’s earliest known forests. 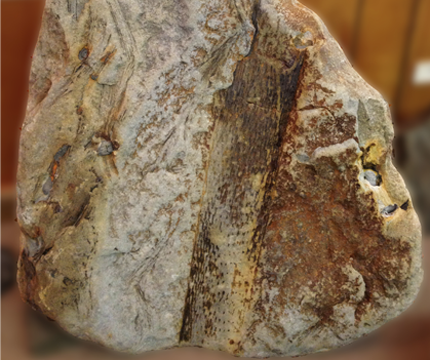 Oldest Tree Form Lycopsid
Lycopsids are the oldest group of living vascular plants. Some of their extinct members were major players in the expansion of plants onto the land. Unlike modern trees, leaves grew out of the entire surface of the trunk and branches. That is evident in this specimen. 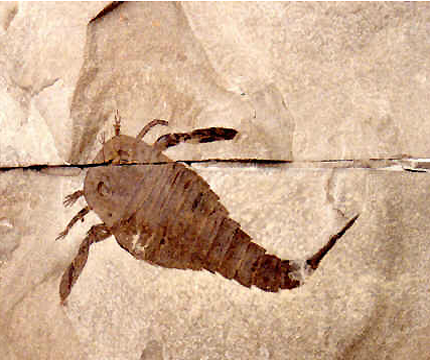 Eurypterid-Sea Scorpion
The Eurypterid is a sea scorpion that ranged in size from 5″ to 7 feet long. It is our New York State fossil. It lived through the Ordovician Period (from 400 million years ago) into the Permian Period (200million years) peaking just before the Devonian Period. Very few fossils are found intact such as this one. This one found in Canada, but many are found in NYS and it was definitely a predator during the time of the Gilboa Forest. They lived in brackish water and adapted to fresh water over their declining years. Armored fish and fish relatives were the main reason for their decline. The Horseshoe crab is the closest remaining living fossil relative today. The Eurypterid ranks as the largest arthropod ever.
On Loan by Kristen Wyckoff 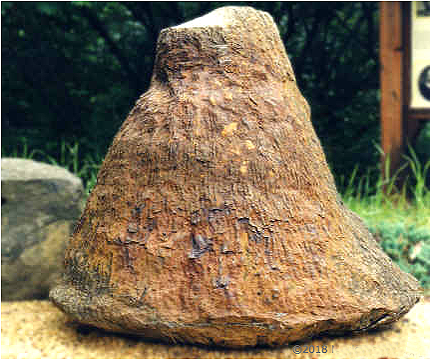 Eospermatopteris
An incredibly preserved example of a 400 million year old Devonian tree. This very large fossil is one of the famous Gilboa fossils discovered in Gilboa, New York. The tree stump clearly shows the wide support base and beginning of the root system at the bottom of the stump for this fern-like tree. 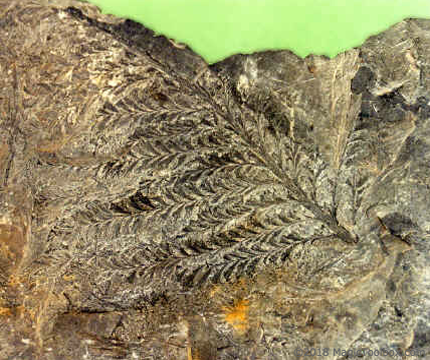 Archaepteris-360 Million Year Old Tree
This foliage from the Archaepteris tree is from late Devonian(360 million years old.) Found in Delaware County during the construction of the Pepacton Reservoir Tunnel. Up until 2005 Archaepteris was the oldest complete fossil tree. Now the Gilboa Tree (Eospermatopteris) is the oldest since the crown was found attached to the trunk and stump portion and renamed Wattieza. 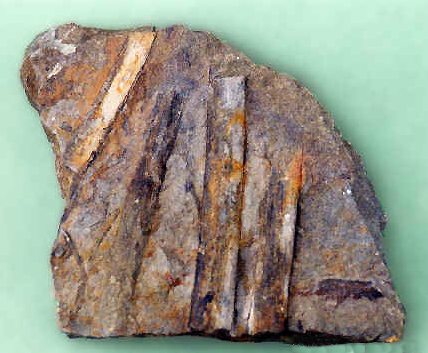 Devonian Tree Stems
Clearly visible are casts and molds of the stems from one of the trees found in the Gilboa area Devonian Forest. 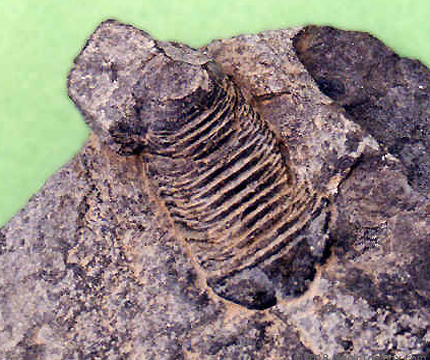 Trilobite-Marine Arthropod
Trilobites are an extinct group of marine arthropods. A diverse group of of extinct animals, their are ten orders of the species. This specimen was discovered at Nickerson Park in Gilboa and donated to the Museum by Arvilla Nickerson. 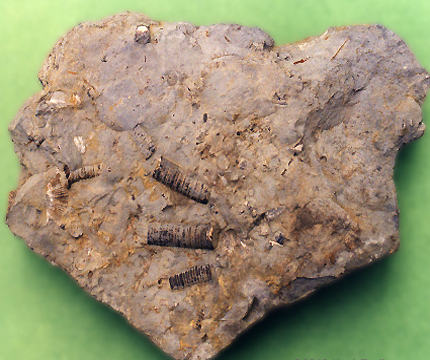 Crinoid Sea-Lily Stems
The crinoids or so-called sea-lilies lived abundantly during the Paleozoic era. Finding the flower attached to the stem is a rare fossil. These stems were found in the northern end of Schoharie county in limestone. 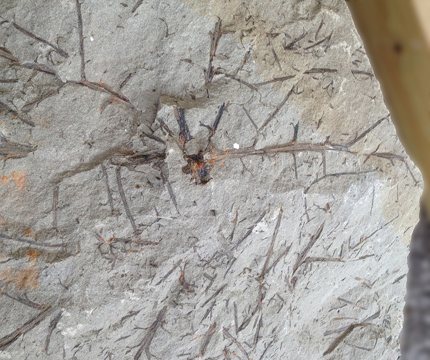 Tetraxylopteris
An extinct vascular plant of the upper Devonian period. Very little is know about about the internal anatomy of this plant. The plant had many side stems with three orders of branches. 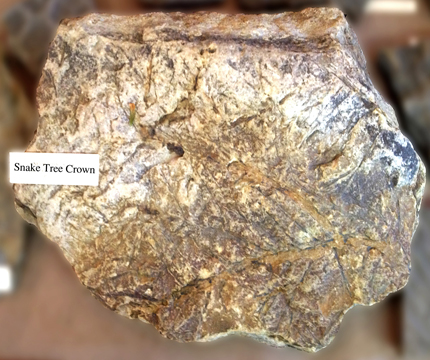 Snake Tree Crown
The overall shape of the Snake Tree consisted of a complex system of branches. In this fossil you can see the Tetraxylopteris or Snake Tree’s crown portion. 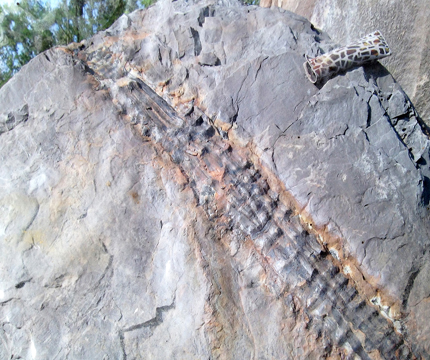 Eospermatoperis Trunk
This tree is comparable to a modern palm. Lacking leaves, the photosynthesis took place in it’s branches. It is not clearly understood exactly how this tree worked, though it is suspected that the trunk was hollow like bamboo. 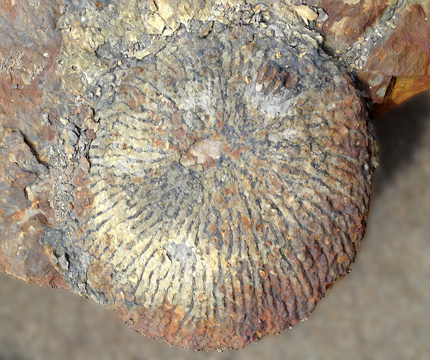 Eospermatopteris Base
This fossil shows the upside down base of Eospermatopteris. You’re viewing the bottom of the stump where the roots would attach. This strange tree contained no wood and some stood as high as 30 feet and was topped with a crown of branches.